Scientific objectivity has a history 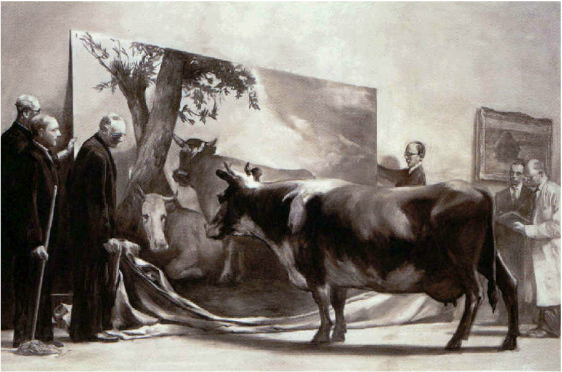 Mark Tansey, "The Innocent Eye Test," 1981.
The mere fact that objectivity *has* a history is revealing. It’s more typical that the timeless, ahuman connotation of “objectivity” renders it the precise sort of thing that does not change throughout history. Subjectivity certainly does, since people change. But objectivity would seem to be ahistorical.

In Lorraine Daston and Peter Galison 1992 article, “The Image of Objectivity”, by looking across scientific atlases and forms of visual representation across the nineteenth century and to the mid-twentieth, they showed that what it took to be objective shifted, that objectivity as a concept and staple of scientific practice is historically contingent. To be more academic about it, they argue, specifically, “that [the mechanical, noninterventionist] form of scientific objectivity emerged only in the mid-nineteenth century and is conceptually distinct from earlier attempts to be “true to nature” in its methods (mechanical), its morals (restrained), and its metaphysics (individualized).”

We might learn from their work that how we conceptualize “objectivity” today is also historically contingent. For me, it was an article that helped show how one can think about what “historically contingent” means and how one might seek to learn more about the broader cultural and moral contexts that have shaped scientific identity and inquiry over the centuries.

The moral space of scientific objectivity had changed by the 20th century in ways characterized by Daston and Galison in this way:

“Neither electroencephalographer nor particle physicist could simply point to a picture and instruct the reader to find identical occurrences in the pictorial output of their instruments. Earlier atlas makers chose “truth to nature” as their slogan: their pictures would depict the designated phenomena as they were, as they ought to be, or as they existed beneath the variation of mere appearances. By the late 19th century, however, the atlas makers no longer could make such unproblematic claims for the general applicability of their images, and by the early 20th century, they had shifted responsibility to the reader”

This points to the role of the audience in matters of assessing and granting the status of objectivity and, following this, a claim to know what something is. But it isn’t just a matter of who reads the scientist’s work; it’s also about who the scientist is and how she (though most atlas makes were certainly he) performs her work. These too change depending on specific historical conditions. Continuing, on objectivity moralized:

“Although mechanical objectivity was nominally in the service of truth to nature, its primary allegiance was to a morality of self-restraint. When forced to choose between accuracy and moral probity, the atlas makers often chose the latter, as we have seen: better to have bad color, ragged tissue edges, and blurred boundaries than even a suspicion of subjectivity. The discipline earlier atlas makers had imposed on their artists had been in the interests of truth to nature (construed as variously as nature itself), but they had deemed judgement and selection essential to the portrayal of the truly typical or characteristic. Later atlas makers, as fearful of themselves as of their artists, eschewed the typical because judgement and selection were needed to detect it, and judgement and selection bordered on the dread subjectivity of interpretation”

None of the above on contingency and subjectivity and what Daston and Galison write about as shifting epistemic virtues is to say that scientific pursuits do not produce legitimate results, but that what counts as “legitimate,” who says so, why one even makes those pursuits in the first place, and what value they have as part of deeper cultural mores — all of those are all contingent. They depend upon the historical context, not just in the past, but today.