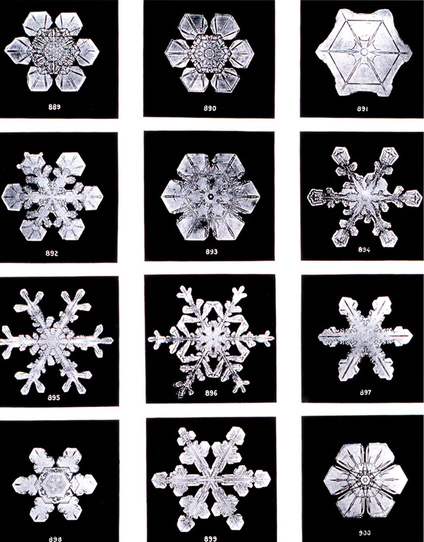 Wilson Bentley, Snowflakes, 1902
The application of photography device in scientific study is not suddenly coming into people’s eyes as soon as Daguerreotype was announced in 1839. The camera obscura had been used for several decades before photography was actually invented. But the significance of photography is that for the first time in history, people can declare they can get a picture as purely mechanical objectivity. The other inventor of photography, William Henry Fox Talbot, said in his famous book The Pencil of Nature :”The plates of the present work are impressed by the agency of Light alone, without any aid whatever from the artist’s pencil. They are the sun-pictures themselves, and not, as some persons have imagined, engraving in imitation.” However, this new technology did not thoroughly replace hand drawing in scientific illustration, on the contrary, it joined in this battle of objectivity.

At first, the retouching skills appeared nearly as soon as invention of photography. Because early technology was more unstable than nowadays, photographers always needed to use stylus or brush to retouch original pictures. And as historians note, 19th century photographers and scientists were aware that photographs could be manipulated. On the other hand, because of immature of this new technology, to make a perfect picture suited to scientific purposes required very hard work. It means the intervention of human beings is inevitable. But these were not the worst things that troubled scientists. Rather, they worried about a more subtle source of error, one more authentically subjective: the projection of their own preconceptions and theories onto data and pictures. Scientists believe in truth-to-nature do not have this problem, all their process in image-making is under close surveillance. The pictures they want are projection of their preconceptions rather than projection of the objects itself. Aspiring mechanical objectivity is their hope to escape from empiricism’s morass.

However, the revolution of photography’s coming is rather on the approach of scientific experiment than the objectivity it guaranteed. In order to get truth-to-nature, scientists and artists need to observe huge numbers of samples from one species and then abstract a picture from them that is characteristic, or the word used by Goethe Urpflanze (prototype). But using a camera to take pictures means every time scientists could only get one particular sample or area’s image each time. So the process of selection becomes important. Let’s see the story of snowflakes. A farmer-photographer Wilson Bentley made series of beautiful photomicrographs of snowflakes since 1885. In his works every snowflake was perfect symmetry. But this symmetry was not made by nature. Bentley carefully retouched every picture to make sure their symmetrical. This is no different from what Arthur Worthington did in 1875 to paint drops of liquids as symmetrical. Roughly the same period around 1890, meteorologist Gustav Hellmann recruited photomicrographer Richard Neuhauss to help him capture snowflakes. Departure from ideal forms and schematic figures, it was disappointment when they found a large fraction of the tiny crystals were all too asymmetrical. But what made Hellman and Neuhauss different from Bentley and other predecessors like William Scoresby or James Glaisher was that they decided to keep what they see (through lens) rather than make them suit to ideal forms. The argument was still in the air: what should a picture represent in scientific atlas? In what approach a picture could be properly represent? 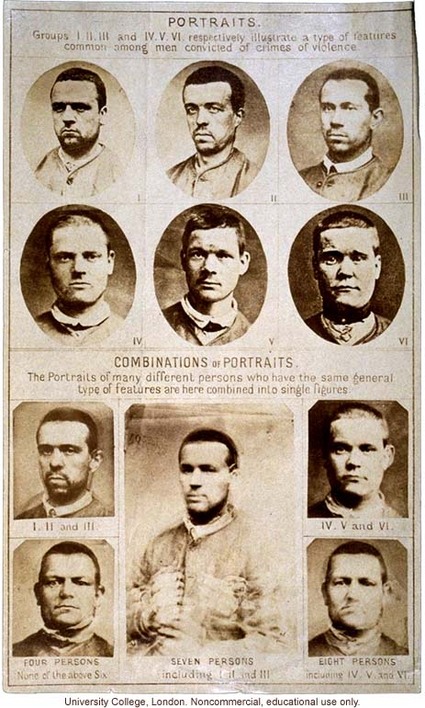 Francis Galton, Composite Portraits of Criminal Types, 1877
The discussion about photography and drawing above is still concentrating on the similar approach they share (paint a single picture and take a single picture). Photography’s ability in scientific experiment was more than that during that period. From 1870s, the English anthropometrist Sir Francis Galton, a cousin of Charles Darwin, used photography to make composite portraits as a tool to visualizing different human “types”. This is also called physiognomy. Galton’s approach was pretty simple. He divided the exposure for a picture by the number of faces to be included. So in this way he could get a generalized picture, it contains a resemblance to all but is not like any of them at the same time. Galton’s method captured a perfect balance point between truth-to-nature and mechanical objectivity. On one side, it depicts an ideal type that synthetized from different individuals. On the other side, his method to get that ideal type was not some scientists thought as subjective idealization but a kind of automatical procedure. Galton had mechanized the abstractive process by which one passed from individual to group. However, Galton’s composite portraits had a social background. He was deeply influenced by Darwin’s theory of natural selection and himself was the father of eugenics. He used this method to composite pictures of people who were considered feeble, including mentally ill, tuberculosis patients, and Jews. After his article published in science journal Nature in 1878, lots of people began to take composite portraits. This team included French amateur photographer Arthur Batut who composited portraits of women from various locales near his hometown, and commercial portrait photographer John L. Lovell who created composite portraits of Harvard college students. Despite all different purpose, all of them admit the average photograph looks better than individuals. “Because the averaged portrait of many persons is free from the irregularities that variously blemish the looks of each of them.” Said Galton. The aesthetic value of these photographs was not Galton’s primary concern, however, his purpose was to avoid any artistic interpretation and keep mechanical precision. On epistemology level, Galton’s method on this average portrait still stuck on the notion of prototype, to create an inexistent image.

This composite portraits tradition also has its modern successor. Nancy Burson, who used celebrities’ faces to create average portraits, trying to find the similarities in character of these people. She also collaborated with law enforcement officials to use this technique help locate missing children and adults. Jason Salavon, a more recent artist, uses computer algorithm to generate a portrait from old masters painting, for example, Hals, Rembrandt, Velazquez. The number of original painting is huge, so the result loses detail on their face, more like an out-focus portrait. There are still many artists using this notion to make art works, but this approach is merely used in scientific studies after Galton’s physiognomy.